TIPS AND TRICKS OF RIVER FISHING 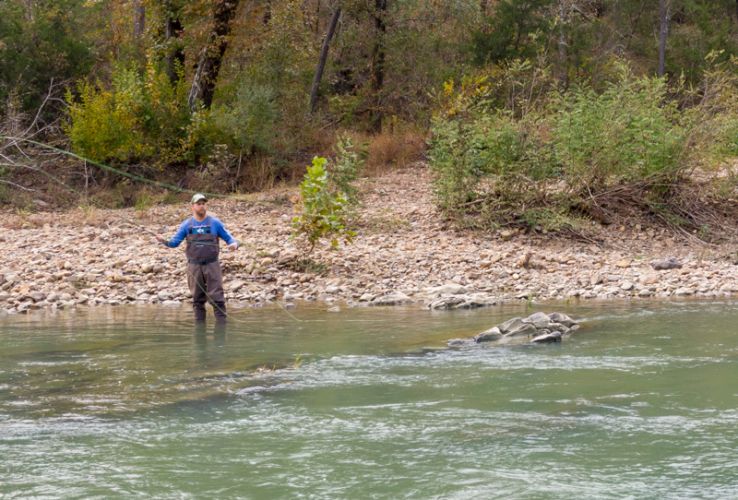 I love the pic above of my friend, Aaron. That dude knows how to cast a fly. He’s an avid fly fisherman.

You know, I don’t think there’s any such thing as a fly fisherman who isn’t avid. You have to be to do that. So much goes into it. The fly selection. The fly-tying. If you’re really avid you tie your own flies. There's a lot to know, but I’m not a true fly fisherman. I just like talking about it and doing it now and then.

You're a fly fisherman?

Just put something out there in warmer months and it’s game on. Since this is the upper Mountain Fork, it's a warm-water stream, with plenty of action in warmer months. Guaranteed. No finicky trout. Just hungry, aggressive bass and what we call here, Goggle-eyed perch. In cooler months you'll have to up your game. Warm-water fish aren't too easy to fool in cooler months. And they stay deeper, so that's a challenge for fly fisherman.

No worries. They’re only a short, scenic drive south to Beavers Bend State Park and the lower Mtn. Fork. It’ll take you about 45 minutes to have your rod out and your waders on.

But as for fishing at River’s Edge, I’m all about that. Been doing that for a stretch and I love it!

Living on the river

Suzy and I lived for years at the Homestead Cabin, with the river in our backyard. It was amazing. I like all kinds of fishing, but nothing is as thrilling to me as being on the river, casting for smallmouth. Dang, it’s fun.

Many of you plan to come here over the next few months and catch a fish. Well, you can. Provided you follow a couple of prescriptions. The smallmouth in the Mountain Fork are native, not stocked. And since they see a lot of novice fisherman on our stretch, they see a lot of stuff that makes them smart.

If the water is brown and muddy, forget it. Just go to our pond. If it's not quite clear, as in murky, then use something with a little flash, like spinners. If the water is clear and pretty, you're in luck. Use natural looking baits, like soft plastic grubs that are smoked color or minnow-like. That's really good in late February through March. When the water warms up, crawfish imitations really start to catch fish. Think plastic salt-craws or the Rebel Wee-craw, deep diver. Can't go wrong with those. These river fish have two main dishes. Crawdads and bait fish. Insects hit the diet at the surface during summer months, but the other two items are mainstays.

It depends on when you're fishing. If February through April, hit the slower moving stretches below rapids. Not in the whitewater areas, but just a bit further on down. That's where they spawn. If April through October, hit the areas just above and below rapids, and focus on eddies between the rapids. Smallmouth need more oxygen in warmer water and therefore move toward faster water if it's hot.

During the colder months

I try to fish deeper water, which is well between shoals. One thing to always keep in mind: reel your bait slowly. As slow as possible. If you're not getting hung up occasionally you're fishing too fast!

When river fishing, go light and small. Six to eight pound test lines are the max. And if you use heavy jig heads you'll be hung up a lot. 1/16th to 1/8th ounce lures are about the max. If you're lucky enough to get a smallmouth bass on your line, hang on. These guys fight and are quite acrobatic. You'll know when you get one, for sure.

Feel fee to reach out to me for more specifics. I'll be glad to help you have fun catching feisty river bass. Like I said earlier. Dang, it's fun.